skip to main | skip to sidebar

Candlestick charting originated in Japan, as far back as the 1600s with rice traders who actually drew the candles on rice paper. It took hundreds of years for the western world to become aware of this technique. Trader Steve Nison is credited with bringing this style to the Western Hemisphere in the 1990s. You can find candlestick charting in many trading systems and software packages.

A single candlestick represents prices for the open, close, high and low of the time period the chart is displaying. The color of the candle determines if the closing price was higher or lower than the opening price. A white candle indicates that the close was higher than the open and the reverse is true for a red candle.

Chart A is a recent daily chart of Verizon. 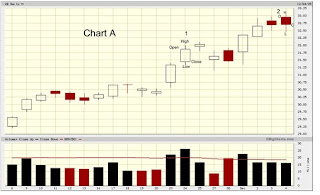 Click Chart to enlarge
The candle in exhibit 1 shows that the opening price for the day was a little lower than 31.50 and the closing price was between 31.75 and 32.00. Therefore, since the close was higher than the open, the color of the candle is white. The small wicks on the bottom and top represent the high and low of the day; near 32.00 for the high and close to 31.25 for the low; but again it is the open and close that determines the color, not the high and low. Exhibit 2 shows a candle that closed lower than the open with a high near 33.00, a low at 32.50, an open a little higher than 32.75 and a close a little lower than 32.75. The color is red because the close was lower than the open. As a reminder, if we were looking at a 5 minute chart, then each candle would represent the open, close, high and low for that particular 5 minute period, instead of the entire day.

If we have a series of candles in an ascending or descending sequence, we can easily draw trend lines to show the momentum direction of the stock. Chart B shows Pacific Gas & Electric with trend lines. 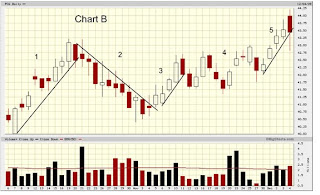 Click Chart to enlarge
By drawing a line as close as possible through the lows of the candles, we see that in Exhibit 1, the stock was clearly in an uptrend for 10 trading days. From the 11th session, we see the beginning of a declining stock price that continued for the next 12 trading days, then a slight upward movement in 3 with a choppy sideways action in 4, followed by another upward swing in 5. Trends combined with other indicators, that will be discussed later on, contribute to trading decisions for buying and selling.

There are a number of candlestick patterns that indicate potential tops and bottoms. The first one we will examine is called The Doji. See Chart C for a top reversal Doji on the General Electric chart. 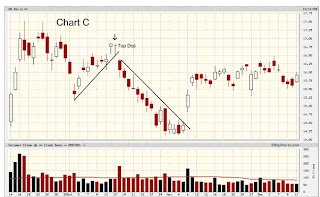 Click Chart to enlarge
This pattern appears as a cross and is formed when the opening and closing prices are the same or very close to being the same. When this happens, no bar is created, just a thin horizontal line intersecting with the vertical line that shows the high and low for the period. It is most potent after a significant uptrend or downtrend, and shows that buyers and sellers are indecisive about the next price movement. More importantly at a top, the Doji indicates that buying interest is weakening. This decline combined with indecisiveness could lead to a trend reversal, which at times just means sideways price movement for a while before a new wave of buying occurs. However, it could also mean a major reversal to the downside. In the GE chart, we see a classic Doji at the top, followed by a series of downward spiraling candles showing a strong downtrend. Of course nothing is perfect, so it is important to get confirmation for the next day or two, to make sure that the trend reversal is really building momentum. In this example, the Doji worked very well in finding the top.

In Chart D, for Honeywell, we see a Doji at the bottom after a steep downtrend. The next two days confirm that a new uptrend is taking place. 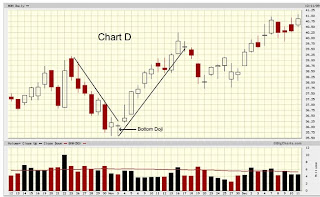 Click Chart to enlarge
This is another example of a classic Doji reversal.
It is important to realize that you cannot follow this pattern or any other pattern blindly without doing research into the stocks you are interested in trading. See how the target stock has reacted to reversal Dojis in the past. Even so, nothing is guaranteed and the price could always blow right thorough the pattern. The idea is to gain experience over time and observe what works best for the instrument you are trading. In Part 3, will look at more popular candlestick patterns.

C. Cohn
Posted by Cohn-Reilly Report at 4:47 PM No comments: 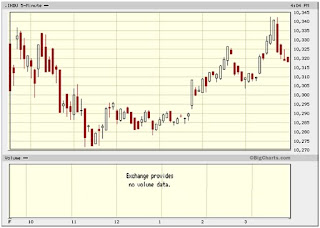 The public often confuses trading with investing, with little help from the various financial programs where these terms are constantly being mixed up. Investing implies a buy and hold strategy to buy assets such as stocks, bonds, commodities and real estate, over a substantial period of time. Trading involves the buying and selling of financial instruments over short term periods. The time frame can be days and weeks, known as swing trading, or hours, minutes and even seconds for day trading.

Regardless of the time frame, traders fall into two distinctive categories – fundamental analysis and technical analysis. Fundamental traders rely on corporate related events or financial metrics to make trading decisions. Some examples are upgrades and downgrades from brokerage firms, earnings announcements, anticipated contracts, mergers, and acquisitions. There are similar characteristics in fundamental analysis trading to investing, with the marked difference that fundamental traders are looking for short term momentum as a result of, or the anticipation of events mentioned above. An example would be “buy the rumor and sell the news”. In this case, a trader would buy stock ahead of a potential favorable earnings announcement, with the intention of selling the stock as soon as the actual announcement is made.

Technical analysis traders rely on price charts and indicators to make trading decisions. They are not interested in corporate news or event driven decision making. Technicians feel that all fundamentals are reflected in charts, and it is not necessary to monitor news or pour over statistics, because the information is represented visually for any time frame the trader wishes to trade in.

Common chart time frames for day traders are 5 minutes, 30 minutes and hourly. For swing traders, daily or weekly charts are frequently used. There are different styles of charts such as Bar, Mountain, OHLC (open, high, low, close) and Candlestick. Many feel that a chart is not usable unless it is in Candlestick form. See the 5 minute Friday November 20 2009 Dow Jones Industrials chart illustration in this article for an example. The representations on this type of chart appear as white or red candle bodies, with wicks on tops and bottoms, displayed as thin lines. Part 2 of this series will focus on Candlestick charting and the many patterns traders use in this style for their buying and selling decisions.

C. Cohn
Posted by Cohn-Reilly Report at 8:30 AM No comments:

Charles Cohn has over 20 years experience in field, having worked as a consultant to several of the industry's top banks; including Citibank, and UBS.
Mr. Cohn endeavors to share his expertise with those who are looking learn the basic concepts and those interested in improving their trading strategies
Back to the Top